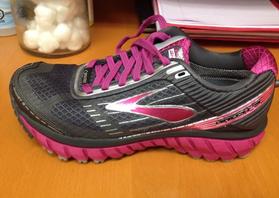 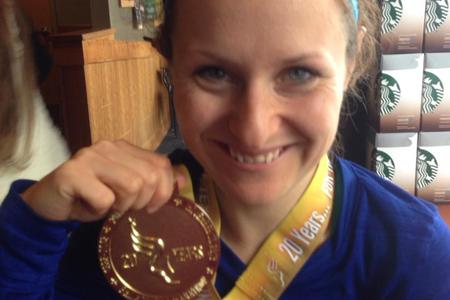 My first pair of Brooks Ghost GTX - which has become my lifesaving winter running shoe!

Winter Running – Welcome to the Crew!

Winter is not just coming… It’s pretty much already here!  For some that means hanging up shoes, storing bikes for the winter and heading into hibernation.  However, as human beings we’re actually built to move, so packing in your athleticism for the season actually defies our inborn nature.  Staying active helps with not just surviving winter, but embracing and enjoying it!  Regular exercise can maintain energy and motivation while staving off common winter ailments including depression, seasonal affective disorder, fatigue, poor circulation, weight gain (helloooooo holiday parties!), blood sugar imbalances and other metabolic issues.

As a year-round outdoor runner, as well as a run-commuter, I have a radical idea for you… maybe keep the shoes out this year!?  I’ve been getting a lot of questions lately about winter running, so here’s a quick rundown on what you need to know to pull it off successfully.

Tips on how to stay toasty and avoid getting soaked:

Running in winter can be slippery and the uneven footing can be a challenge.  Tips on how to tackle the terrain:

There will be days when it’s -30C (or even colder!) outside, you haven’t seen the sun shining in weeks, and your hot pot of coffee and snuggly slippers are calling your name.  Motivating yourself to get out the door can be challenging, so lastly…. Tips on how to stay motivated!

Hopefully this article helps encourage a few of you to keep at it, start at it, do it more safely, or at least to get your bodies moving this winter.  If energy or injuries get in your way, the Somerset Health & Wellness crew is here and happy to help you get back to health and staying active.  See you in the snow!

In honour of my very first blog on this site, I thought I'd give a quick overview on my gradual buildup to this ultimate goal.  I've been active all my life, but have been running more seriously in the past three years.  It started off as cross-training for soccer season when I wanted to outrun other players to the ball... and in the end soccer turned out to be my speed-training so I could better my performance in races!

As many of us do, I had started my running "career" by tackling the occasional 5k race.  The excitement of racing, my competitive spirit, and the natural camaraderie amongst fellow runners got me hooked pretty quickly and I continued to increase my distances.  Over the following years I competed in numerous 5 & 10k's, bumping up to 1/2 marathons and 30k distances, before finally coming to the realization that a full marathon was a very achievable goal.  So here's a brief run-down on my first full!

First of all, Philadelphia is a beautiful city.  The opportunity just to walk around the city centre was amazing.  It's known to have more statues and murals than any other city in the U.S., and the layout uses their beautiful City Hall as a focal point which pretty much every road leads toward (and you can see it from just about everywhere downtown, great for orientation purposes!).  The Art Museum (home of the famous "Rocky Steps") is also a major focal point sitting right on the Schuylkill River and acting as a central hub for the start and finish of the race.  Our group took a stab at running the steps and doing some pretty extensive "Rocky-style" photo-shoots the day beforehand and were happy we did!

The race starts early, you enter security at 5am so there is enough time to clear the 30,000 runners that participate in the full and half-marathon.  I was happy to have travelled down to Philly with the East York Toronto Runner's, so had plenty of entertainment in the two-hour wait before the race started.  Special note:  If you have to go to the washroom, go EARLY!!!!  There are plenty of porta-potties but with that many runners the lineups will always be massive.  I went an hour before the start and just barely made it out before  being funneled into our corrals.  Also, be sure to pack multiple layers to throw away.  We were frigid during our 5-7am wait, but during the race temperatures went up to 19C, 25C with the humidex!

The route itself offers a lot of variety and plenty to see.  The first half goes mostly through narrow city streets that are packed with spectators.  Being a rather petite person with mild claustrophobia, this was the most challenging part of the race for me mentally.  The full and half runners start together, and there are often  slower runners that you will be tempted to weave your way through.  Don't bother!  It takes too much effort and the course will stay a narrow and crowded field until you get out of the central part of the city.  There is plenty to see in the mean time along Benjamin Franklin Parkway, you'll run parallel to the Delaware River, past the Liberty Bell and City Hall a couple of times.  It gets even more exciting through University City where student congregations offer free beer to runners (note: it's way too early in the race to carb-load with something THAT heavy and carbonated, just wait, there will be another beer offering at 19 miles if you're brave and still tempted!).

You'll finally see some trees and more open space out toward the Philadelphia Zoo, and will be either grateful or depressed when crossing the river when the half-marathons come to their finish line back at the Art Museum.  I was grateful... I prefer running in more scenic areas with fewer people, so the much wider and tree-lined path along the Schuylkill River was very much welcome!  The remainder of the route is 13.1 miles of out-and-back running.  Great because  there's no way you can get lost (not that you would anyways!) and you'll have the chance to see the elite runners finish, however can be daunting knowing you'll be on the same stretch or road the remainder of the race.  This can get boring.  Combined with the fact you've already run 21.2k, this is known as one of the more difficult stretches because there is less crowd support sending you energy to speed your travels.  My suggestion is tune into the beauty of the river and the trail and get pumped for the orange slices and beer that await at 19-20 miles!  Of course, being a Naturopath I don't necessarily promote the idea of mid-run beer, and having a sensitive stomach I don't play around much with mid-run fuel during races (learned that one at the St. Catherine's Chocolate Race!).  But if that's what gets you through, go for it!  I was happy to stop and snap a photo of a fellow runner while he downed a glass.

My last 6 miles was pretty achey and tiring, but seeing that light at the end of the tunnel always seems to ramp up my energy.  I downed the rest of my fuel (I always bring Honey Stingers and Gu's during races and long-runs, and will usually take one every 40 mins) and powered home to the finish.  The pain on crossing the finish line and stopping was pretty instantaneous, and I slowly but with pride hobbled my way to every food station in sight.  One of which was offering hot chicken broth, which was a nice change in addition to the usual fruit and power bars.  Of course, a trip to Philly wouldn't be complete without an authentic post-race re-fuel Philly Cheesesteak, which was heaven in my mouth, dairy, gluten and all!  Overall, this was an amazing experience.  I don't know that 42.2k is my favourite race distance yet, but I'm happy to report I can do it and finished in a respectable first-time effort of 4 hours and 15 seconds.  Next marathon goal:  crack 4 hours!